Over the past week, the internet has blown up with the #metoo campaign, in which sexual assault/harassment survivors have been called upon to write #metoo on social media in order to capture the magnitude of how commonplace sexual assault is, particularly towards women.

I think that the campaign has good intentions. I think that it is doing a good job of finally getting people to have a conversation about a prevalent issue that has been so taboo for so many years. I think that it is providing a strong platform for survivors to share their stories and experience solidarity with one another. I have even participated myself, writing #metoo in the comments of a couple of Instagram posts.

Let me explain why.

Telling your story of sexual assault is a coming out process. You do it when you’re ready. And if you don’t want to do it, you don’t have to. You do not owe anybody that part of your identity. Sometimes, it’s not safe to come out. Sometimes you are so traumatized by what happened to you that you don’t even have the words to fully comprehend it yourself.

The fear and the judgement you face by your loved ones and all of society is unimaginable. Personally, for me, as is the case with many assault survivors, coming out was just as traumatic, if not more traumatic, than the assault itself. People blame you for your assault, force you to relive the trauma over and over again, laugh it off…some of my darkest moments have been caused by people that I trusted with this information. People that I loved.

Now, think about putting this information on the internet, where trolls roam freely and where people can say whatever they want without consequence. Think about the rape threats and harassment that will ensue if enough people see your story. Imagine reliving one of the worst experiences of your life all over again.

You cannot come out until you are ready.

So why is it that we are putting all of the responsibility on survivors to fix this problem? Why are the women speaking out getting praised and the women who are afraid to speak up getting demeaned and pressured (hmmm, doesn’t that sound familiar…)? I cannot tell you the number of times I have been shut down for trying to talk about my assault. It feels as if people are only comfortable with a survivor telling their individual story when it’s on their terms, and not on the terms of the survivor.

Why is it that once again the pressure is falling on the oppressed group to fix the issue?

Sexual violence and rape culture disproportionately affect women; I have never met a woman who hasn’t experienced it in some fashion. So a conversation about sexual assault should be led by women. But there is a myth that sexual assault is a “female experience.” It’s not, and I feel that the campaign has not brought that to light. We cannot forget about all of the other groups of people who have gone through this.

In a study by The National Gay and Lesbian Task Force, 12% of transgender or gender non conforming respondents in grades K-12 reported experiencing sexual violence in their lifetime. According to the Rape, Abuse, and Incest National Network, 3% of American men have experienced an attempted or completed rape in their lifetime.

And one cannot forget that sexual assault is one of the most underreported crimes because of all of the stigma surrounding it. Like I mentioned before, coming out is terrifying, so not all survivors are going to respond with #metoo. So the campaign can’t really fully express the magnitude of the problem.

I did not write this post to hate on the campaign or the people participating in it, because ultimately, I think it is well-intentioned and can do a lot of good. But I want to provide a more comprehensive set of solutions.

Allies, I am calling you out. Men, I am calling you out. You can’t keep staying silent. People will listen to you. When you hear the so-called “locker room talk,” shut it down. If you witness an instance of sexual assault or harassment, intervene. Amplify survivor’s voices, but don’t pressure them. Listen. Don’t tell us how to feel or what to do. To quote Lady Gaga: “Until you walk where I walk, it’s just all talk.”

Keep this conversation going. Expand on it as much as you can. I can guarantee you, there are thousands more Harvey Weinstein’s and Bill Cosby’s and Brock Turner’s. Sexual assault occurs at a rampant rate and rape culture is everywhere. We can’t just forget about this in a week until the next predator comes out of the woodwork. The actual president of the United States has been accused of sexual assault by over a dozen women. Stop pretending that this will just go away.

Stand with all survivors. Even the ones that choose not to speak out, or can’t speak out, or complied with sexual activity because they felt pressured to. I am coming out because I feel ready to, and so I can be a voice for those who aren’t . But ultimately, we don’t owe you our stories. We do not deserve to have this burden forced upon us. If you’re going to stand with some of us, you have to stand with all of us. 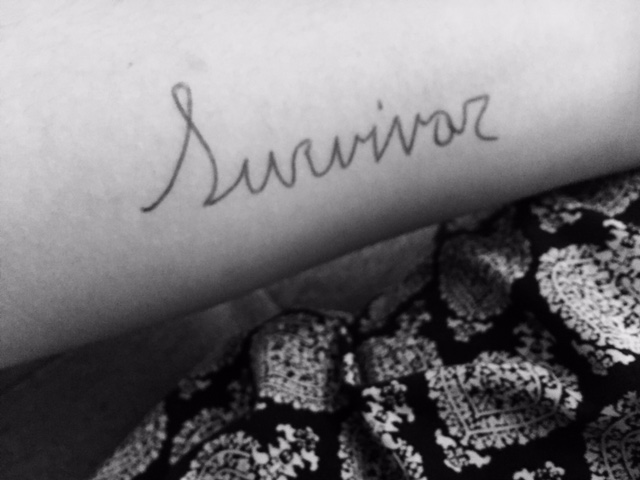