I am so fortunate to have won the Laws of Life essay contest again. Laws of Life is hosted by the Better Business Bureau and centers around the laws of life that govern you personally. This year I chose to write about my journey with body image, from hatred to acceptance, and how I became an activist because of it.

When I was a little girl, I could eat whatever I wanted, and never gain any weight. I was stick thin. And I was complimented on a daily basis for this. Adults would always tell me how jealous they were of my small frame. Thin became synonymous with pretty. I didn’t think much of these comments at the time, but as I grew older, they started to add up.

My body changed drastically when I hit the seventh grade. Puberty came fast and hard, and my self-perception became skewed. Suddenly, I had curves, I had gained nearly twenty pounds in one summer, my clothes were too tight, and those skinny-pretty comments stopped. My parents were going through a horrible divorce, so I stress ate. And then I looked in the mirror and hated what I saw. My thighs were too big, my stomach jutted out too much, I wasn’t “proportional” enough. Food became a source of emotional baggage, carbohydrates became synonymous with guilt.

The messages that the media sent me were what manipulated me the most, although I didn’t realize it at the time. Nearly every movie I saw with a lead female character focused solely on her finding a husband. She was always this girl that fit “western” beauty standards, and I would constantly compare myself to her. I began thinking that no boy would ever love me because I was just too fat and ugly, and that made me worthless. I would see pictures of models photo shopped in magazines to look perfect. I was taught to think of my body as an ornament, something to be looked at and fondled. I would try to express the pain I was going through with other girls, and I only ever got one response: “I hate how I look.”

At thirteen years old, I tried my first of many diets. They never work, because diets aren’t supposed to work. They would always fail, so I would give up, binge, hate myself, try again….this was a vicious cycle for years of my life. Instead of focusing on my education, contribution to society or having fun, I fixated on my appearance.

In eighth grade, I stumbled upon a Netflix documentary called Miss Representation. The documentary itself talked about the systematic oppression of women through the media, how movies, television, advertisements, and so on objectify women and manipulate young girls into having low self-esteem. For the first time in my life, I didn’t blame myself for my problems: this was society’s fault. A fire was lit inside of me, because I realized that girls everywhere were experiencing the same phenomenon that I was. I became an activist.

I currently serve on the global youth advisory council of the very nonprofit that made that documentary, The Representation Project. I have screened both of their films within my community, participated in a Montessori Model United Nations conference on the economic empowerment of women, and am currently designing a self-confidence workshop for middle school girls so that I can help someone that is currently going through the issues I once faced.

However, most importantly, becoming involved in the body image movement and the fight for gender equality has made me love myself again. It hasn’t been easy, and I still struggle with it; after all, it is hard to unlearn what society has taught you. Becoming an activist gave me a way to turn my suffering into something beautiful. I have learned that I am not alone in my struggles. I have learned that my self worth has nothing to do with how I look. What’s inside of me is what makes me beautiful. The skin I live in now will be my home forever, because as soon as I loved myself for who I was, I achieved the happiness I had been constantly striving for.

One of the most important laws of life is love. And in order to love others, one must practice self-love. However, this is not always easy. For girls, loving oneself is an act of rebellion. Girls are told that self-loathing will bring societal acceptance. I am proof of this standard, but I am also proof that acting through love is a worthy law of life. 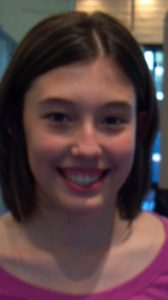