This election has brought out a myriad of hate and anger within this country, and rightfully so. I can’t really ever think of an election that has divided this country in such a significant way, that has created so much anxiety, that has been so sensationalized ever before. Never has so much hatred and attack sprung up amongst not only the candidates, but the American people as well. Never have we had a candidate who expresses his misogyny, homophobia, racism and tyrannical policies so openly, unless you’re not counting pre or post suffrage eras, where this kind of open and obvious hatred was considered completely acceptable and commonplace within society.

But there is something I feel that we as a nation have strongly overlooked. A snowflake in the midst of a shit storm, to be blunt.

I have a collection of over 100 Hillary Clinton pins. They range from the typical “I’m With Her” to the sassy “Pantsuits For President 2016” to the classy “She Can Do It!” The thing is, I have a list of strong women that I admire, and Hillary is definitely not nearly as close to the top of the list as Michelle Obama or Maya Angelou or Emma Watson. So why do I have so much Hillary merch?

That’s where the snowflake comes in.

History has been made.

We have lived in a patriarchal society for a very long time. We have had 42 presidents that have all been wealthy, white, heterosexual men. Marion Wright Edelman once said: “You can’t be what you can’t see,” and I don’t think any statement rings truer. All this country has really seen have been the Teddy Roosevelts and the Ronald Reagans and the George Bushs, who are important, but only represent a small portion of the American people. And when equal representation is not given, everybody fails.

If you don’t see someone who looks like you standing up for what they believe in, how are you going to feel like your voice matters? And what if that voice cures cancer? Eliminates hunger? What if that voice could change the world?

What if we are suppressing that voice by not giving you the opportunity to use it?

My pin collection will always serve as a reminder to me that this world we live in is not just “a man’s world”; everyone’s role in society is equally important, and I, as a woman, am capable of achieving whatever I want to, no matter the obstacles.

The day she became the nominee, I was brought to tears. Everyone deserves that feeling of empowerment.

Hillary is only the first step toward change. Lets see what will happen next. 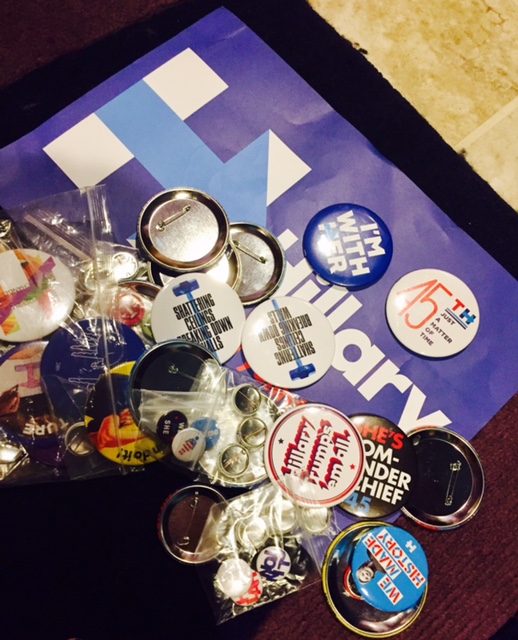